One of our graduates Dr Barbara Nichol was a recent guest on ABC Radio National’s Historyonics, discussing the origins of the dim sim and its role in the history of Chinese immigration to Australia. Barbara’s PhD thesis—’The breath of the wok: Melbourne’s early Chinese restaurants—community, culture and entrepreneurialism in the city, late nineteenth century to the 1950s’—was completed in 2012, and she is currently revising it for publication. 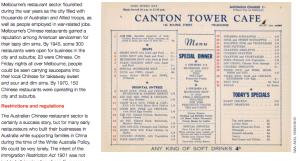